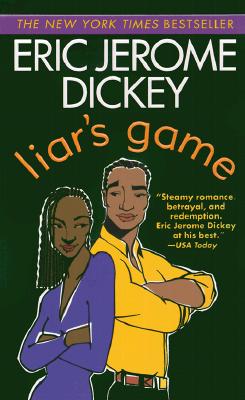 
Backordered, maybe unavailable. Email or call for more details.
In this sensational New York Times bestseller, Eric Jerome Dickey explores how real people come together and fall apart in a story about a love that starts with a lie....

Dana Ann Smith has ditched New York—and a relationship gone bad—for Los Angeles, looking for a new man, a new career, and some stability. She thinks she's found it in Vincent Calvalry Browne Jr., a handsome, hardworking aerospace tech. They've offered just enough of themselves to make it the perfect romance. And they've withheld just enough to ruin it. When their secrets come to light, Dana and Vince come face-to-face with the fact that the passionate game between lovers and liars has just begun....

Eric Jerome Dickey (1961–2021) was the award-winning and New York Times bestselling author of twenty-nine novels, as well as a six-issue miniseries of graphic novels featuring Storm (X-Men) and the Black Panther. His novel Sister, Sister was honored as one of Essence’s “50 Most Impactful Black Books of the Last 50 Years,” and A Wanted Woman won the NAACP Image Award in the category of Outstanding Literary Work in 2014. His most recent novels include The Blackbirds, Finding Gideon, Bad Men and Wicked Women, Before We Were Wicked, The Business of Lovers, and The Son of Mr. Suleman.

“[O]ne of the most successful Black authors of the last quarter-century.”—The New York Times