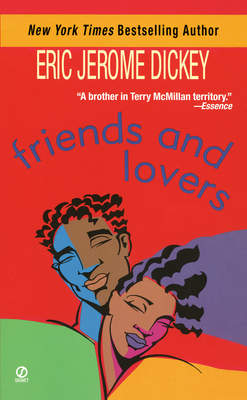 
Backordered, maybe unavailable. Email or call for more details.
Hailed as one of “the most successful Black authors of the last quarter-century” (The New York Times), Eric Jerome Dickey captures the humor and heartache of modern love in this sexy, soulful tale.

Attraction can be instant. So can the consequences. Just ask Leonard, Debra, Tyrel, and Shelby. Four friends with so much in common: They’re good-hearted, loyal, and vulnerable to the complicated state of relations between men and women. They’re all searching for love—or at least unqualified affection. Either way, their lives are about to change….

A witty, honest portrait of the choices we make in the search for happy ever after, Friends and Lovers chronicles the lives of four young Black people through the joy, laughter, and pain of not-so-everyday life.
Eric Jerome Dickey (1961–2021) was the award-winning and New York Times bestselling author of twenty-nine novels, as well as a six-issue miniseries of graphic novels featuring Storm (X-Men) and the Black Panther. His novel Sister, Sister was honored as one of Essence’s “50 Most Impactful Black Books of the Last 50 Years,” and A Wanted Woman won the NAACP Image Award in the category of Outstanding Literary Work in 2014. His most recent novels include The Blackbirds, Finding Gideon, Bad Men and Wicked Women, Before We Were Wicked, The Business of Lovers, and The Son of Mr. Suleman.