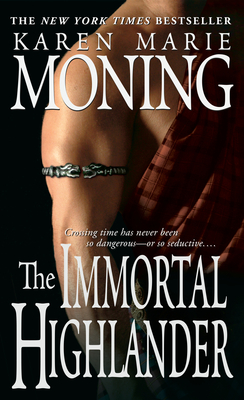 This is book number 6 in the Highlander series.

Enter a world of timeless seduction, of ancient intrigue and modern-day passion. Enter the dazzling world of Karen Marie Moning, whose acclaimed Highlander novels have captivated readers, spanning the continents and the centuries, bringing ancient Scotland vividly to life. In a novel brimming with time-travel adventure and sensual heat, the bestselling author of The Dark Highlander delivers a love story that will hold you in thrall—and a hero you will most certainly never forget.

With his long, black hair and dark, mesmerizing eyes, Adam Black is Trouble with a capital T. Immortal, arrogant, and intensely sensual, he is the consummate seducer, free to roam across time and continents in pursuit of his insatiable desires. That is, until a curse strips him of his immortality and makes him invisible, a cruel fate for so irresistible a man. With his very life at stake, Adam’s only hope for survival is in the hands of the one woman who can actually see him.

Enter law student Gabrielle O’Callaghan, who is cursed with the ability to see both worlds: Mortal and Faery. From the moment she lays eyes on this stunning male, Gabby is certain of one thing: He could be her undoing. Thus begins a long, dangerous seduction. Because despite his powerful strength and unquenchable hungers, Adam refuses to take a woman by force. Instead, he will tease his way into Gabby’s bed and make her want him just as he wants her.

Now, no matter how hard Gabby tries to avoid him, Adam is everywhere, invisible to all but her—perched atop her office cubicle in too-tight jeans, whispering softly from behind the stacks of the law library, stealing her breath away with his knowing smile…all the while tempting her with the promise of unimaginable pleasure in his arms. But soon danger will intrude on this sensual dance. For as Adam’s quest to regain his immortality plunges them into a world of timeless magic and the deadly politics of the Faery queen’s court, the price of surrender could be their very lives. Unless they can thwart the conspiracy that threatens both mortal and Faery realms…and give them a shot at a destiny few mortals ever know: glorious, wondrous, endless love.
Karen Marie Moning is the #1 New York Times bestselling author of the Fever series, featuring MacKayla Lane, and the award-winning Highlander series. She has a bachelor’s degree in society and law from Purdue University.