Alaric the Goth: An Outsider's History of the Fall of Rome (Paperback) 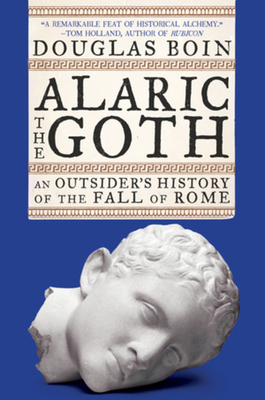 Alaric the Goth: An Outsider's History of the Fall of Rome (Paperback)

The collapse of Rome is one of western history's most discussed subjects; and it's hard writing a book that doesn't rehash things. Here we see parallels to today's world as the Empire grows increasingly partisan and radical in the face of mass migration and external pressures, through the eyes of a migrant nobleman who would become Rome's most feared boogeyman of the era. Though Alaric's life was poorly documented, Boin builds a narrative around him that is rich and realistic.

Denied citizenship by the Roman Empire, a soldier named Alaric changed history by unleashing a surprise attack on the capital city of an unjust empire.

Stigmatized and relegated to the margins of Roman society, the Goths were violent “barbarians” who destroyed “civilization,” at least in the conventional story of Rome’s collapse. But a slight shift of perspective brings their history, and ours, shockingly alive.

Alaric grew up near the river border that separated Gothic territory from Roman. He survived a border policy that separated migrant children from their parents, and he was denied benefits he likely expected from military service. Romans were deeply conflicted over who should enjoy the privileges of citizenship. They wanted to buttress their global power, but were insecure about Roman identity; they depended on foreign goods, but scoffed at and denied foreigners their own voices and humanity. In stark contrast to the rising bigotry, intolerance, and zealotry among Romans during Alaric’s lifetime, the Goths, as practicing Christians, valued religious pluralism and tolerance. The marginalized Goths, marked by history as frightening harbingers of destruction and of the Dark Ages, preserved virtues of the ancient world that we take for granted.

The three nights of riots Alaric and the Goths brought to the capital struck fear into the hearts of the powerful, but the riots were not without cause. Combining vivid storytelling and historical analysis, Douglas Boin reveals the Goths’ complex and fascinating legacy in shaping our world.

Douglas Boin is a professor of history at Saint Louis University and author of Coming Out Christian in the Roman World and two scholarly books on antiquity. He lives in Austin, Texas.
This is less a biography than the anatomy of an empire. Mr. Boin opens up the Rome of the fourth and fifth centuries and examines it with scientific precision and a wonderful turn of phrase, guiding readers with erudition and verve into battles in which men’s eyes are stabbed by arrows ‘the way a silver toothpick stabbed an olive.’
— Economist

The most engaging parts of Alaric the Goth, and by far the greater portion of its contents, diverge from Alaric’s story to give a sweeping view of Roman life near the fall of the empire. It’s here, especially in matters of Christian-pagan tension, that Mr. Boin excels.
— James Romm - Wall Street Journal

A brilliantly readable account of the fall of the western Roman Empire, which for the first time spotlights not the Romans, but the Gothic invader Alaric. This is a story for our own age too. Douglas Boin asks us to take seriously the question of what would have happened if the tottering city of Rome had prioritized inclusive citizenship over paranoia and conflict; if it had built bridges rather than walls. This is urgent, gravid history, which will be read by anyone interested in empire, cultural conflict and the making of the modern narrative of the West.
— Tim Whitmarsh, author of Battling the Gods: Atheism in the Ancient World

An entertaining, highly readable account of a figure who has previously been regarded as a pitiless heel straight from central casting. Boin, in a fresh approach, looks at the events leading up to the sack of Rome from the Goths’ perspective.
— Clayton Turner - New Criterion

Boin paints a richly detailed portrait of the world in which Alaric maneuvered, defined by the thrashings of an empire in turmoil….A cogent, readable text that vividly conveys the fears and confusion that surrounded the issue of immigrants’ rights in a period of declining Roman power.
— Wendy Smith - The Boston Globe

This is a story of desperation and broken promises, pitting refugees from the north seeking homes, respect, and citizenship in an unwieldy empire already juddering with anti-immigrant fears, social upheavals, and political treachery. With deep research and insight, Boin traces the trajectory of cultural conflict from dashed hopes to devastation.
— Adrienne Mayor, author of Gods and Robots

Written in an enchanting and effortless style that transports you back in time, Douglas Boin’s Alaric the Goth masters the art of bringing the past to life in a thrilling fashion and making it relevant to today. An essential and scholarly page-turner.

— Sarah Parcak, author of Archaeology From Space: How the Future Shapes Our Past

A fresh look at a little-known corner of the history of the Roman Empire…Boin delivers a revealing account of the late Roman empire, which was misgoverned, retreating from its frontier provinces, and almost perpetually at war but still certain it was the epitome of civilization. An admirable history of a lesser-known Roman era.
— Kirkus

A remarkable feat of historical alchemy: a transmutation of the scanty and inadequate sources into the gold of a gripping narrative.
— Tom Holland, author of Rubicon: The Last Years of the Roman Republic

Eye-opening revisionist history...[Boin’s] brisk and well-documented account reveals the Roman Empire 50 years before its collapse as a decadent society rife with xenophobia and political conflict. This invigorating rehash of ancient times speaks clearly to the modern world.
— Publishers Weekly

A fascinating account of one of the most important—and misunderstood—leaders in Roman history. Douglas Boin…tells the story of a man fighting for respect and dignity in a world consumed by civil war, religious intolerance, ethnic prejudice, greedy self-interest, and treacherous politics. Boin brings Alaric’s world to life, and so brings Alaric to life. A must read for anyone who wants to understand the whole story of the fall of Rome.
— Mike Duncan, New York Times best-selling author of The Storm Before the Storm: The Beginning of the End of the Roman Republic