City of Light, City of Poison: Murder, Magic, and the First Police Chief of Paris (Paperback) 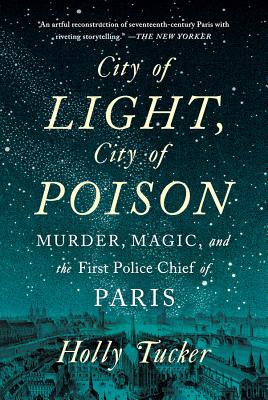 City of Light, City of Poison: Murder, Magic, and the First Police Chief of Paris (Paperback)

"An artful reconstruction of seventeenth-century Paris with riveting storytelling." —The New Yorker

In the late 1600s, Louis XIV assigns Nicolas de la Reynie to bring order to Paris after the brutal deaths of two magistrates. Reynie, pragmatic and fearless, discovers a network of witches, poisoners, and priests whose reach extends all the way to the king’s court at Versailles. Based on court transcripts and Reynie’s compulsive note-taking, Holly Tucker’s engrossing true-crime narrative makes the characters breathe on the page as she follows the police chief into the dark labyrinths of crime-ridden Paris, the halls of royal palaces, secret courtrooms, and torture chambers.

Holly Tucker is the author of City of Light, City of Poison and Blood Work, a finalist for the Los Angeles Times Book Prize and the Times Literary Supplement Book of the Year, and is a professor of French at Vanderbilt University. She lives in Nashville, Tennessee, and Aix-en-Provence, France.
City of Light, City of Poison is not only a serious, meticulously researched work of nonfiction, it is an irresistible story. Full of danger, mystery, and excitement, it will keep you up well into the night, marveling at this forgotten world of dark intrigue.

— Candice Millard, author of Hero of the Empire

Tucker tells the story as if it were a classic whodunit, bringing alive an extremely complicated and baffling series of events.
— Thad Cahart - Newsday

Tucker is a deft scene-setter, and there is an enjoyable whiff of The Untouchables about her evocation of the Parisian underworld, Louis XIV’s decision to clamp down on it, and the entry of her hero, La Reynie.… [This] is excellent material for a romp, which is precisely what Tucker makes of it.
— Tim Smith-Laing - Sunday Telegraph

City of Light, City of Poison [is] a cop drama of sorts, intermingled with a historian’s tenacious pursuit of the evidence.… Tucker’s way with a lavish description will have you planning your all-star adaptation of the book.… Fascinating.

A fierce tale of conspiracy and retribution.… Thanks to Tucker’s sympathetic necromancy and her luscious resurrection of everyday detail, even in gilded palaces the human psyche seems familiarly deceitful and self-justifying.
— Michael Sims, author of The Story of Charlotte’s Web and Arthur and Sherlock

Tucker walks the tightrope between scholarship and storytelling with practiced bravado. City of Light, City of Poison is as tightly structured as an Agatha Christie mystery.

— Pamela Toler - History in the Margins

At once bewitching and chilling, the dark story of toxic intrigue, murder, and mayhem in the Sun King’s France reads like the most gripping thriller, thanks to Holly Tucker’s storytelling flair and relentless research.
— Adrienne Mayor, author of The Poison King

City of Light, City of Poison is a fascinating history of how a brilliant policeman brought light and law to Paris.