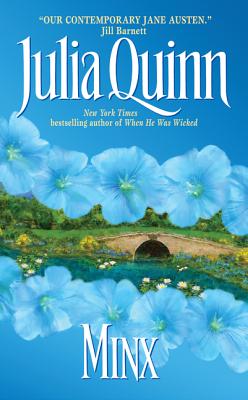 It takes a minx to tempt a rogue...Beautiful and feisty Henrietta Barrett has never followed the dictates of society. She manages her elderly guardian′s estate, prefers to wear breeches rather than dresses, and answers to the unlikely name of Henry. But when her guardian passes away, her beloved home falls into the hands of a distant cousin.

And it takes a rogue to tame her...William Dunford, London′s most elusive bachelor, is stunned to learn that he′s inherited property, a title...and a ward bent on making his first visit his last. Henry is determined to continue running the Cornwall estate without help from the handsome new lord, but Dunford is just as sure he can change things...starting with his wild young ward. But turning Henry into a lady makes her not only the darling of the town, but an irresistible attraction to the man who thought he could never be tempted.

#1 New York Times bestselling author JULIA QUINN began writing one month after graduating from college and, aside from a brief stint in medical school, she has been tapping away at her keyboard ever since. Her novels have been translated into 43 languages and are beloved the world over. A graduate of Harvard and Radcliffe Colleges, she lives with her family in the Pacific Northwest.

Look for BRIDGERTON, based on her popular series of novels about the Bridgerton family, on Netflix.