Revolution 1989: The Fall of the Soviet Empire (Hardcover) 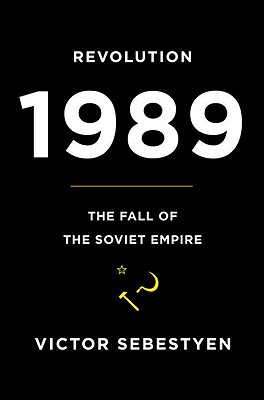 Revolution 1989: The Fall of the Soviet Empire (Hardcover)

From the author of Twelve Days: The Story of the 1956 Hungarian Revolution comes a revealing new account of the collapse of the Soviet Union’s European empire during months of largely peaceful revolution that profoundly changed the world.

At the start of 1989, six European nations were Soviet vassal states. By year’s end, they had all declared national independence, embarking on the road to democracy. How did it happen so quickly? Why did the USSR capitulate so readily? Victor Sebestyen, who was on the scene reporting for the London Evening Standard at the time, draws on his firsthand knowledge of the events of 1989, on scores of interviews with other witnesses and participants, and on newly uncovered archival material to answer these questions in unprecedented depth.

Sebestyen tells the story through the eyes of ordinary men and women, some of whom found themselves almost miraculously transformed: the furnace stoker who became the Czech foreign minister; the Romanian poet who, just freed from jail, was made vice president of the newly liberated nation. He shows how power was wielded or ceded by Mikhail Gorbachev, George H. W. Bush, Lech Walesa, Václav Havel, and Margaret Thatcher, among others; how the KGB helped bring down former allied regimes; how the United States tried to slow the process; and why the collapse of the Iron Curtain was the catalyst for the fall of the entire Soviet empire.

Authoritative, riveting in both its broad political sweep and its abundance of personal detail, this is an essential addition to the annals of contemporary history.

VICTOR SEBESTYEN is the author of "Twelve Days: The Story of the 1956 Hungarian Revolution." He has worked for many British newspapers, including the "Evening Standard." Born in Budapest, he lives in England.

U.S. Praise for Revolution 1989: The Fall of the Soviet Empire

“A sturdy examination of events that led to the collapse of Eastern Europe’s communist regimes. . . Sebestyen’s episodic, skillfully narrated account . . . [is] a well-crafted, constantly revealing study of the world-altering changes of recent history.”
—Kirkus Reviews

“In the last few months, numerous books have come out that attempt to synthesize the compelling story of the fall of communism, but Revolution 1989 comes closest to being the essential volume. Sebestyen’s elegant narrative lays out in crisp episodes what was happening in Russia, Bulgaria, East Germany, Hungary, Czechoslovakia, and Afghanistan throughout the tumultuous 1980s. His portrait of Gorbachev is particularly sharp—and asks us to reconsider the Soviet leader’s surprising role 20 years ago. As a refugee from Hungary in 1956, Sebestyen brings a personal touch to these historic moments.”
—The Daily Beast

“Sebestyen’s strength is his sharp focus and racy prose . . . Here is history written like a Greek tragedy . . .”
—Michael Binyon, The Times (London)

“Pacy and vivid . . . [Sebestyen] is a thoroughly professional writer with a gift not only for exposition but also evocation.”
—Anthony Howard, The Daily Telegraph

“A compelling and illuminating account of a great drama in the history of our times which showed once again that ordinary men and women really can change the world.”
—Jonathan Dimbleby, The Mail on Sunday

“Revolution 1989 is a lucid primer on the background to, and events of, that magical year. Sebestyen’s narrative is clear, entertaining, and sure-footed.”
—Angus Macqueen, The Guardian

“It’s a complex story spanning many countries, but this exciting yet deeply researched work brings it impressively to life . . . Compelling.”
—Simon Sebag Montefiore, The Observer

“A rollicking mix of high drama and sordid reality . . . spiced with telling quotations.”
—The Independent

“A thrilling read . . . Sebestyen is good at sketching the leading players but he also succinctly conveys what life was like for ordinary citizens.”
—Christopher Sylvester, Daily Express

“Victor Sebestyen brilliantly pulls together the events that led to the fall of the Soviet empire . . .”
—Richard Beeston, The Spectator

“The tale fair rips along . . . A solid piece of storytelling of an exhilarating and enspiriting moment of history.”
—Misha Glenny, Evening Standard

“Revolution 1989 is a superbly written and impressively documented chronicle of the year John Paul II described as an annus mirabilis . . . A vivid portrait.”
—Vladimir Tismaneanu, The Times Literary Supplement

“Sharp focus and racy prose capture the events and decisions that fed into the growing turmoil across Eastern Europe as the East German regime crumbled.”
—The Times (London) “We’re Reading” section

“Sebestyen has made an excellent job of organising his disparate material, so that the reader can recapture, with the same sense of bafflement and elation, the events that made the Europe we live in—and after twenty years he can add understanding too.”
—Michael Fry, Scotland on Sunday

“Sebestyen has got the pace and the balance just right.”
—The Scotsman

“Sebestyen’s record of the 1980s is a compelling, page-turning read . . . a precise, step-by-step account of the high politics and the big-name political players in the years between the August 1980 strikes in Gdansk and the crumbling of the Berlin Wall nine years later.”
—Denis MacShane, Tribune

“A digestible and colourful history of that miraculous year.”
—The Economist

and for Twelve Days: The Story of the 1956 Hungarian Revolution
“A small masterpiece that should be read and treasured by all who value mankind’s eternal quest for freedom.”
–New York Post

“Sebestyen is excellent at bringing to life the revolutionary movement. Personalities leap from his pages.”
–Financial Times