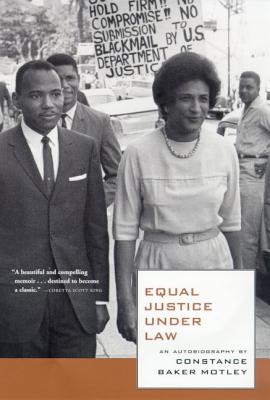 This wise and affecting memoir is the inside story of the great efforts leading up to the Supreme Court's decision in Brown v. Board of Education in 1954 and the fight to implement it--and its implications for affirmative action and black poverty today.

A black woman who moved in the corridors of power in the middle of this century, Constance Baker Motley has been a pioneer in both black civil rights and women's rights. As the key attorney assisting Thurgood Marshall at the NAACP Legal Defense and Educational Fund, she argued a dozen cases before the Supreme Court (winning all but one), and her representation of James Meredith in his bid to enroll in the University of Mississippi made her famous. Subsequently, as Manhattan borough president and a U.S. district court judge, she has fulfilled the highest aspirations of our legal and political system.

Equal Justice Under Law, the most detailed account to date of the legal conflicts of the civil rights movement, is also an account of Motley's struggle, as a black woman, to succeed, a record of a life lived with great courage and responsibility.

Constance Baker Motley is a senior judge and a former chief judge of the U.S. District Court for the Southern District of New York. She lives in Manhattan and Chester, Connecticut.

“With the vision one would expect from a great advocate and premier judge, Constance Baker Motley has written a remarkable and insightful book. No person has done more in this century than Motley for racial and gender justice in this country.” —A. Leon Higginbotham

“Illuminates a crucial fragment of American history that is at risk of being outshone in the public memory by later, more dramatic events.” —Anthony Day, Los Angeles Times