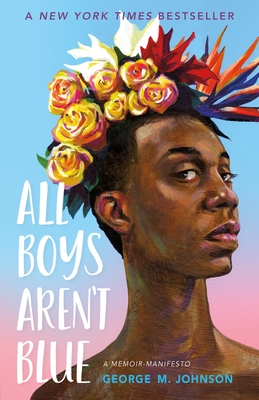 All Boys Aren't Blue is an incredibly timely, heartwarming, personal story that touches on all of the issues that queer folks face while coming into themselves. I found myself laughing, crying, and feeling every emotion in between while reading this memoir. And the deeply conversational style of writing aids in connecting to George in some of the toughest moments of their story.

In a series of personal essays, prominent journalist and LGBTQIA+ activist George M. Johnson explores his childhood, adolescence, and college years in New Jersey and Virginia. From the memories of getting his teeth kicked out by bullies at age five, to flea marketing with his loving grandmother, to his first sexual relationships, this young-adult memoir weaves together the trials and triumphs faced by Black queer boys.

Both a primer for teens eager to be allies as well as a reassuring testimony for young queer men of color, All Boys Aren't Blue covers topics such as gender identity, toxic masculinity, brotherhood, family, structural marginalization, consent, and Black joy. Johnson's emotionally frank style of writing will appeal directly to young adults.

GEORGE M. JOHNSON is a writer and activist based in New York. They have written on race, gender, sex, and culture for Essence, the Advocate, BuzzFeed News, Teen Vogue, and more than forty other national publications. George has appeared on BuzzFeed’s AM2DM as well as on MSNBC. All Boys Aren’t Blue is their debut, and was an Amazon Best Book of the Year, an Indie Bestseller, a People Magazine Best Book of the Year, and optioned for television by Gabrielle Union. The New York Times called it "an exuberant, unapologetic memoir infused with a deep but cleareyed love for its subjects." At the time of publication, George used he/him pronouns. Speak with them on Twitter:
@IamGMJohnson. iamgmjohnson.com

"An exuberant, unapologetic memoir infused with a deep but cleareyed love for its subjects." —The New York Times

"This title opens new doors, as the author insists that we don't have to anchor stories such as his to tragic ends: 'Many of us are still here. Still living and waiting for our stories to be told—to tell them ourselves.' A critical, captivating, merciful mirror for growing up black and queer today."
—Kirkus Reviews, starred review

"An absolute necessity . . . the personal stories and the healing and reconciliation of self in this title are all undeniably honest and relatable—a reminder of our shared imperfection and humanity." —Booklist

"The conversational tone will leave readers feeling like they are sitting with an insightful friend . . . This young adult memoir is a contemporary hallmark of the blossoming genre. Johnson anchors the text with encouragement and realistic guidance for queer Black youth." —School Library Journal

"Johnson’s debut is a collection of heartfelt personal essays revolving around themes of identity and family . . . In a publishing landscape in need of queer black voices, readers who are sorting through similar concepts will be grateful to join him on the journey." —Publishers Weekly

"Powerful . . . Johnson’s book is geared toward young adults—a market that needs this level of realness about everything from finding and harboring joy to bullying to navigating queerness. All Boys Aren’t Blue is a game changer." -Bitch Magazine

"A personal examination of what it's like to grow up as a black and queer young man . . . a can't-miss collection." -POPSUGAR