The Peasant Prince: Thaddeus Kosciuszko and the Age of Revolution (Paperback) 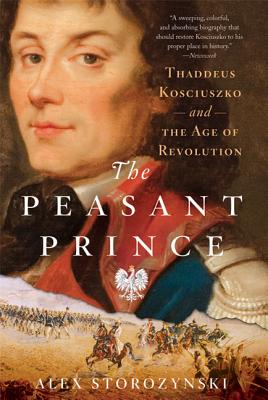 The Peasant Prince: Thaddeus Kosciuszko and the Age of Revolution (Paperback)

Thaddeus Kosciuszko, a Polish-Lithuanian born in 1746, was one of the most important figures of the modern world. Fleeing his homeland after a death sentence was placed on his head (when he dared court a woman above his station), he came to America one month after the signing of the Declaration of Independence, literally showing up on Benjamin Franklin's doorstep in Philadelphia with little more than a revolutionary spirit and a genius for engineering. Entering the fray as a volunteer in the war effort, he quickly proved his capabilities and became the most talented engineer of the Continental Army. Kosciuszko went on to construct the fortifications for Philadelphia, devise battle plans that were integral to the American victory at the pivotal Battle of Saratoga, and designed the plans for Fortress West Point—the same plans that were stolen by Benedict Arnold. Then, seeking new challenges, Kosciuszko asked for a transfer to the Southern Army, where he oversaw a ring of African-American spies.

A lifelong champion of the common man and woman, he was ahead of his time in advocating tolerance and standing up for the rights of slaves, Native Americans, women, serfs, and Jews. Following the end of the war, Kosciuszko returned to Poland and was a leading figure in that nation's Constitutional movement. He became Commander in Chief of the Polish Army and valiantly led a defense against a Russian invasion, and in 1794 he led what was dubbed the Kosciuszko Uprising—a revolt of Polish-Lithuanian forces against the Russian occupiers. Captured during the revolt, he was ultimately pardoned by Russia's Paul I and lived the remainder of his life as an international celebrity and a vocal proponent for human rights. Thomas Jefferson, with whom Kosciuszko had an ongoing correspondence on the immorality of slaveholding, called him "as pure a son of liberty as I have ever known." A lifelong bachelor with a knack for getting involved in doomed relationships, Kosciuszko navigated the tricky worlds of royal intrigue and romance while staying true to his ultimate passion—the pursuit of freedom for all. This definitive and exhaustively researched biography fills a long-standing gap in historical literature with its account of a dashing and inspiring revolutionary figure.

Alex Storozynski is president and executive director of the Kosciuszko Foundation. Also a Pulitzer Prize–winning journalist, he was an editorial board member at the New York Daily News, the founding editor of amNew York, and a former city editor and contributing editor to The New York Sun. He is the author of The Peasant Prince. He lives in West Orange, New Jersey.

“Despite his heroic efforts, Kosciuszko's fatherland had to wait a century after his death before regaining independence from Russia. The world would have to wait even longer for an accessible, soundly researched, English-language biography. With "The Peasant Prince," Pulitzer Prize-winning journalist Alex Storozynski has filled the void. And what a tale he has to tell. A melodramatic, foiled elopement deprived the young Kosciuszko of the love of his life and led him to cross the Atlantic and sign up with George Washington's ragtag rebel army. The Polish émigré engineered the network of fortifications around West Point that ­Benedict Arnold unsuccessfully tried to betray to the British and that he lped keep the main British army bottled up in New York City. Kosciuszko also played a key role in the wilderness campaigns that ended in the crucial American victory at Saratoga. And he made a triumphal return to his native Poland in time to lead a doomed but heroic national struggle against Russia and overwhelming odds. All this and a supporting cast that amounts to a Who's Who of 18th-century American and European history. In America, those who knew Kosciuszko included Benjamin Franklin (who helped recruit him); George Washington (who had trouble getting Kosciuszko's name right but hailed him as a military "engineer of ­eminence"); Thomas Jefferson (who called him "as pure a son of liberty as I have ever known"); and Thomas Paine (who, like Kosciuszko, was granted honorary French ­citizenship by the revolutionary regime but spoke out against its brutal excesses). In Europe, Kosciuszko's acquaintances included Napoleon Bonaparte (who tried--and failed--to use him as a pawn in European power politics) and Catherine the Great (who, after ruthlessly suppressing the Polish insurrection, kept Kosciuszko a political prisoner in Russia until her death in 1796).” —Wall Street Journal

“Alex Storozynski has just published "The Peasant Prince: Thaddeus Kosciuszko and the Age of Revolution," a sweeping, colorful, and absorbing biography that should restore Kosciuszko to his proper place in history. President of the Kosciuszko Foundation, which promotes Polish-American educational exchanges, Storozynski is also a Pulitzer Prize–winning journalist who knows how to tell a good story. In his account, Kosciuszko--as soldier in America and then a revolutionary in his homeland-- exemplified some of the best ideals of his era. He also experienced some of its worst betrayals and disappointments. ... Emancipation was 'a controversial idea ahead of his time,' Storozynski writes--just, as this stirring biography makes clear, like the man himself.” —Newsweek.com

“The riveting story of an engineer whose military strategy led to the triumph at the pivotal Battle of Saratoga, and his forging of West Point as the impregnable fortress that Benedict Arnold tried to sell to the British. This engrossing biography offers new details on the roles of Africans, Jews, Native Americans, peasants and women during the revolutionary struggles of 18th-century America and Europe. . . . The praise for Kosciuszko during his lifetime was profuse. . . . Yet most New Yorkers have only heard the name Kosciuszko because of the bridge on the Brooklyn Queens Expressway. With the publication of The Peasant Prince, that ought to change. Just as Obama's presidency has Americans rethinking the history of our nation, the new details Mr. Storozynski has unearthed about the American Revolution should change the way Americans look at the birth of our nation.” —The New York Observer

“A well-written tribute to an interesting and certainly admirable man.” —Booklist

“In The Peasant Prince Alex Storozynski fills a gap in our picture of the American Revolution, and relates it to the worldwide struggle for freedom. Thaddeus Kosciuszko was a noble soul with few options, a friend of liberty in an age of aggression and tyranny. Storozynski shows how he navigated a life of romance and realpolitik, keeping his principles intact.” —Richard Brookhiser, senior editor of the National Review, and author of What Would the Founders Do? Our Questions, Their Answers

“Prize-winning journalist Storozynski pulls military strategist and engineer Thaddeus Kosciuszko (1746–1817) back from the brink of obscurity by including almost every documented detail to create the first comprehensive look at a man who once famously symbolized rebellion. His were the plans sold to the British by Benedict Arnold. And Kosciuszko's years of devotion to the American cause framed his efforts to transform Poland into a self-governing republic freed from the oversight of Russia's interests. He antagonized Catherine the Great and, later, Napoleon. Kosciuszko rallied the first Jewish military force since biblical times to fight for Polish independence, and consistently supported equality and education for peasants, Jews, Muslim Tatars and American slaves--which earned him the devotion of the masses and lectures by the upper classes. Readers of military and American history should take note: the minute details will enthrall devotees. Casual readers will benefit from Storozynski's expert crafting of a readable and fact-filled story that pulls readers into the immediacy of the revolutionary era's partisan and financial troubles.” —Publishers Weekly

“The Peasant Prince is an objective history that is needed in today's America and Poland. The hero of Alex's book is one of the fathers of modern democracy in the same mold as Washington, Jefferson, Madison and Lincoln.” —Adam Michnik, Solidarnosc activist and editor in chief of Gazeta Wyborcza

“In a meticulously researched work, Storozynski greatly enhances our understanding of Kosciuszko's personality and motivations by investigating the Pole's relationship and feelings toward Africans, Jews, and peasants. His contribution advances our knowledge of this complex character whom Jefferson considered the ‘purest son of liberty' he ever knew.” —James Pula, Purdue University

“The Peasant Prince is a testament to a great man and an important addition to world history.” —Byron E. Price, Texas Southern University