Mushrooms of the Midwest (Paperback) 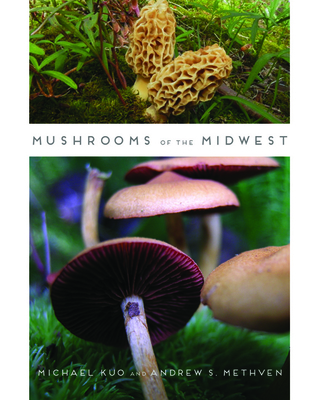 Mushrooms of the Midwest (Paperback)

Fusing general interest in mushrooming with serious scholarship, Mushrooms of the Midwest describes and illustrates over five hundred of the region's mushroom species. From the cold conifer bogs of northern Michigan to the steamy oak forests of Missouri, the book offers a broad cross-section of the fungi, edible and not, that can be found growing in the Midwest’s diverse ecosystems.

With hundreds of color illustrations, Mushrooms of the Midwest is ideal for amateur and expert mushroomers alike. Michael Kuo and Andrew Methven provide identification keys and thorough descriptions. The authors discuss the DNA revolution in mycology and its consequences for classification and identification, as well as the need for well-documented contemporary collections of mushrooms.

Unlike most field guides, Mushrooms of the Midwest includes an extensive introduction to the use of a microscope in mushroom identification. In addition, Kuo and Methven give recommendations for scientific mushroom collecting, with special focus on ecological data and guidelines for preserving specimens. Lists of amateur mycological associations and herbaria of the Midwest are also included. A must-have for all mushroom enthusiasts!

Michael Kuo is an English instructor at Eastern Illinois University and the principal developer of MushroomExpert.com. He is the author of 100 Edible Mushrooms and Morels. Andrew S. Methven is a professor of mycology at Eastern Illinois University. He is the author of Agaricales of California, Volume 10: Lactarius and The Genus Clavariadelphus in North America. The authors previously collaborated on 100 Cool Mushrooms.

"This book does what no prior book has done by describing many of the thousands of species of mushrooms found in the Midwest. Anyone studying fungi will appreciate this large collection of species documented in a single volume. Mushrooms of the Midwest is a significant contribution."

"Especially well-written and packaged. . . . from the cold conifer bogs of northern Michigan to the steamy oak forests of southern Missouri, the book offers a broad cross section of the fungi, edible and not, that can be found growing in the Midwest's diverse ecosystems."--James A. Baggett, Better Homes and Gardens

"An attractive, informative book for mycologists and mushroom enthusiasts. Though it focuses on the Midwest, it will be useful for all geographic areas. . . . A beautiful presentation of a fascinating group of organisms. Highly recommended.--Choice

"A significant new field guide and study manual for the novice and expert mushroomer alike. Never before has a field guide devoted chapters to the potential role of enthusiasts to the field or detailed a training manual that will ensure their contributions are useful to the professional."--Prairie Naturalist