Family of Shadows: A Century of Murder, Memory, and the Armenian American Dream (Paperback) 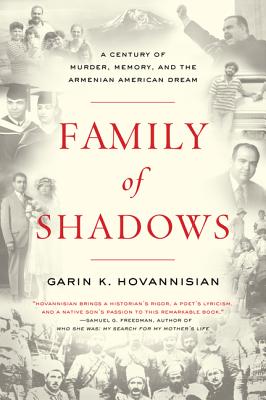 By Garin K. Hovannisian
$16.99
Not Currently On Our Shelves. Usually Ships in 1-5 Days

Combining the historical urgency of The Burning Tigris, the cultural sweep of Middlesex, and the psychological complexity of Bending Toward the Sun, Garin K. Hovannisian's Family of Shadows is a searing history of Armenia, realized through the lives of three generations of a single family. In Family of Shadows, Hovannisian traces the arc of his family's changing relationship to its motherland, from his great-grandfather's flight to America after surviving the Armenian Genocide to his father Raffi Hovannisian's repatriation and subsequent climb to political prominence as the head of the Heritage Party. Hovannisian's articles on Armenian issues, including the Genocide, the Armenian Diaspora, and the challenges of post-Soviet statehood, have appeared in the Los Angeles Times, Christian Science Monitor, Chicago Tribune, Armenian Observer, Ararat, and numerous other publications.

Garin K. Hovannisian is a recipient of the Fulbright Fellowship in Creative Writing and the Lynton Award for Book Writing. He lives in Los Angeles and Yerevan, Armenia. He has written for the New York Times, the Los Angeles Times, and Liberty.

“Garin Hovannisian brings a historian’s rigor, a poet’s lyricism, and a native son’s passion to this remarkable book. Intimate as memoir yet expansive as an epic, Family of Shadows puts the Armenian experience, in all its tragedy and triumph, into memorably human terms.”
— Samuel G. Freedman, author of Who She Was: My Search for My Mother’s Life

“Weaving together history, culture, and original reporting, Family of Shadows is an inspired tribute, full of passion and appreciation for the genealogy of the Hovannisian family and its transformation into an American success story.”
— Dr. Vartan Gregorian, President of Carnegie Corporation of New York and author of The Road to Home: My Life and Times

With what one can only describe as an artistic skill, Garin Hovannisian interleaves the micro-story of his resilient family with the macro-narrative of the Armenian Genocide. One swiftly learns to appreciate the true meaning of the word ‘indestructible’.
— Christopher Hitchens, author of Hitch-22: A Memoir

“Garin Hovannisian tells one of modern history’s great unexamined stories. Whether you are an Armenian American like me or come to this story anew, Family of Shadows will move you with the intensity and intimacy of its detail.”
— David Ignatius, columnist for The Washington Post and author of Body of Lies